The Best Rust Treatment For Cars 2022

Cars that may otherwise run and drive perfectly fine are often sent to early graves due to severe rust. However, it’s easily preventable by using a quality rust treatment for cars and within this article, we list some of the best available in the UK.

From our research and testing of various rust treatments, we found that the best rust treatment for cars is the Hammerite Waxoyl. It’s designed to remove rust as well as help prevent the spread of new rust. However, if you require a rust remover that’s ideal for targeting small areas, the Bilt Hamber Hydrate 80 is the best alternative.

As our team own multiple old/classic cars, we are very experienced with treating rust. In the above photo, we installed a new spring perch and treated the area to avoid any rust from appearing in the future. As well as our experience from testing various rust treatment products on our own cars, we also based our recommendations in this article upon their protective and removal qualities, ease of use and value for money.

Before treating any corrosion upon your car, it’s advised that you use a wire brush beforehand. This allows you to remove any loose or flaking rust and treat it more effectively using one of our recommendations. If you are new to treating rust on your car, we wrote an in-depth guide on how to remove and treat rust whilst testing out some rust treatment products.

Below is a list of the best rust treatments for cars that removes corrosion and helps prevent the spread of new rust. 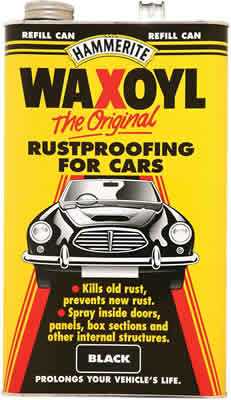 The Hammerite Waxoyl formula is a rust treatment for cars that’s been used by professionals for many years and for good reason too. Not only does it kill off old rust but it also prevent new rust from appearing once applied.

In terms of the application, it can be applied via sprayer or brushed onto the areas that need rust treatment. However, to activate the formula, it must be heated beforehand, which can be achieved by putting the tin in a bucket of hot water.

Other features of the Hammerite Waxoyl include:

Overall, the Hammerite Waxoyl is the best rust treatment for cars that not only removes rust but also prevents it reappearing. Before use, we recommend that you use a wire brush to remove any loose rust and also warm up the formula. It can then be freely sprayed in all the areas that need treating and help to prolong the life of your car.
Check it Out

Although Bilt Hamber are known for their detailing products, they also produce a number of other products such as this rust treatment. It’s an easy to use formula that removes rust and creates a durable barrier against it reappearing.

According to the brand, their rust treatment provides superior results that are longer lasting than many of the alternatives. It’s also completely safe to use with a water-based and non-flammable formulation.

Other features of the Bilt Hamber Hydrate 80 include:

The Bilt Hamber Hydrate 80 is another highly rated rust treatment for cars that provides quick and long lasting results. However, unlike the Waxoyl formula by Hammerite that’s suitable for large surfaces (or the full car), this rust treatment is best used for small to medium areas of rust.
Check it Out

Jenolite is a UK brand that offer a number of rust treatments that have been tried and tested for many years. Their rust converter is their most popular product and is designed to convert rust into a ready to paint surface.

According to the brand, it’s able to convert rust into a stable compound in just 15 minutes, which is very impressive.

Other features of the Jenolite Rust Converter include:

Interestingly, this rust converter is also used on London’s Big Ben and even the Eiffel Tower, which means treating rusty car surfaces will be a walk in the park for this formula. Overall, if you want to convert rust before painting it, the Jenolite Rust Converter is an excellent option that won’t disappoint.
Check it Out 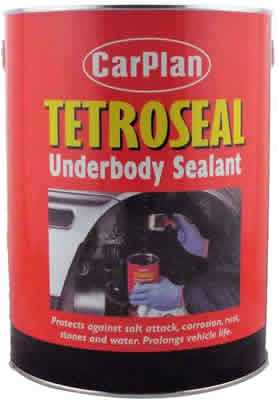 The CarPlan Underbody Sealant is another dedicated rust treatment for cars and is a simple brush on formula that’s designed to protect against further corrosion, salt and water. According to the brand, it can be used upon the underbody, door sills, wings, boot lids and a wide array of other components that need protecting.

If you intend to sound proof your car, this rust treatment is also well known for its excellent sound deadening qualities.

Other features of the CarPlan Underbody include:

Overall, the CarPlan Underbody Sealant is a versatile formula that’s very thick and provides a durable coating to protect any exposed surfaces. Although it can be messy to apply, it has the unique bonus of providing excellent sound deadening qualities, which is highly desirable for older vehicles.
Check it Out 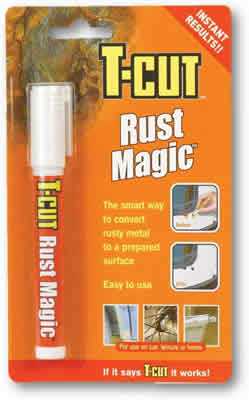 The T-Cut Rust Magic is one of the easiest rust remover products to use and also one of the cheapest. In terms of the application, simply apply the fluid from the pen onto the surface and allow 15 minutes for it to activate. It will then turn blue/black, which means that it can then be painted after an additional 3 hours.

Other features of the T-Cut Magic Pen Rust Remover include:

The Magic Rust Pen by T-Cut is a highly effective rust remover that’s designed for small rust areas such as stone chips or dents. It’s simple to apply, cheap and converts rust in just under 15 minutes.
Check it Out 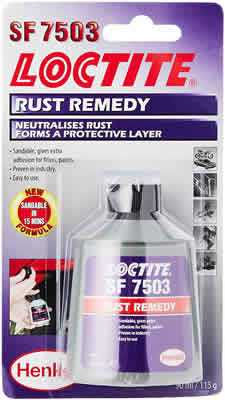 The Locite 7503 is a very popular rust neutraliser type of treatment that’s ideal for using upon the bodywork, chassis and subframe. According to the brand, it acts as a primer to protect against further corrosion.

Other features of the Locite 7503 include:

Overall, the new and improved Locite Rust Neutraliser is an easy to use formula that’s ideal for small patches of rust. Considering the budget price tag and the ease of using this rust treatment, you simply can’t go wrong.

How We Rated The Rust Treatments

As well as researching a number of rust treatment products that are available in the UK, we also have plenty of experience of treating rust on our very own cars. If you want to see us test some of the rust treatments, we posted photos upon our Instagram page as shown below.

In terms of rating the rust treatment products, we based our recommendations upon our tests and plenty of research. Some of the factors that we considered include their protective and removal qualities, ease of use and value for money.

Rust can be a huge problem for classic or imported cars that haven’t been treated. All of our recommendations above include rust treatments for cars that remove corrosion and protect the surface against further rust. Before using any of the rust treatments, we advise that you use sand paper or a wire brush to remove any flaking beforehand. This ensures that the treatment you use cover all of the exposed metal in order to stop it spreading.