How To Jump Start A Car

A car that won’t start because of a flat battery can completely ruin your day but jump starting it is a fast way to get it up and running again. Within this guide, we walk you through each step on how to jump start a car with leads or without another car.

Whether you accidentally left the headlights on over night or you haven’t driven the car for weeks, the battery may go flat and lose its charge. If you haven’t got the time to charge the battery, you can jump start the car to get the engine running. This can be achieved using jump leads and a working car or a jump starter booster pack.

Before attempting to jump start your car, you’ll want to check that the battery isn’t defective. You should check for any leaks or visible damage to the battery itself as this may be a sign that it needs replacing and not jump starting.

If the battery isn’t showing any signs of damage, below are the steps to take in order to jump start a car.

How To Jump Start A Car

Park both of the cars in a position where the jump leads can easily reach both of the batteries with ease.

Connect the working battery’s negative terminal to an earthing point on the flat battery’s car (such as unpainted metal on the engine or the chassis) with the negative lead.

Keep both engines switched off for 5 minutes then start the working car’s engine allowing it to run for 2 minutes.

Turn on the engine of the flat battery’s car and allow it to run for around 10 minutes.

6. Turn Off Both Cars & Disconnect

Turn off both the car engines and disconnect the leads in reverse order (remove negative from your car first).

Try and restart your car, if it doesn’t start, jump start it again and allow the working car to idle for longer. 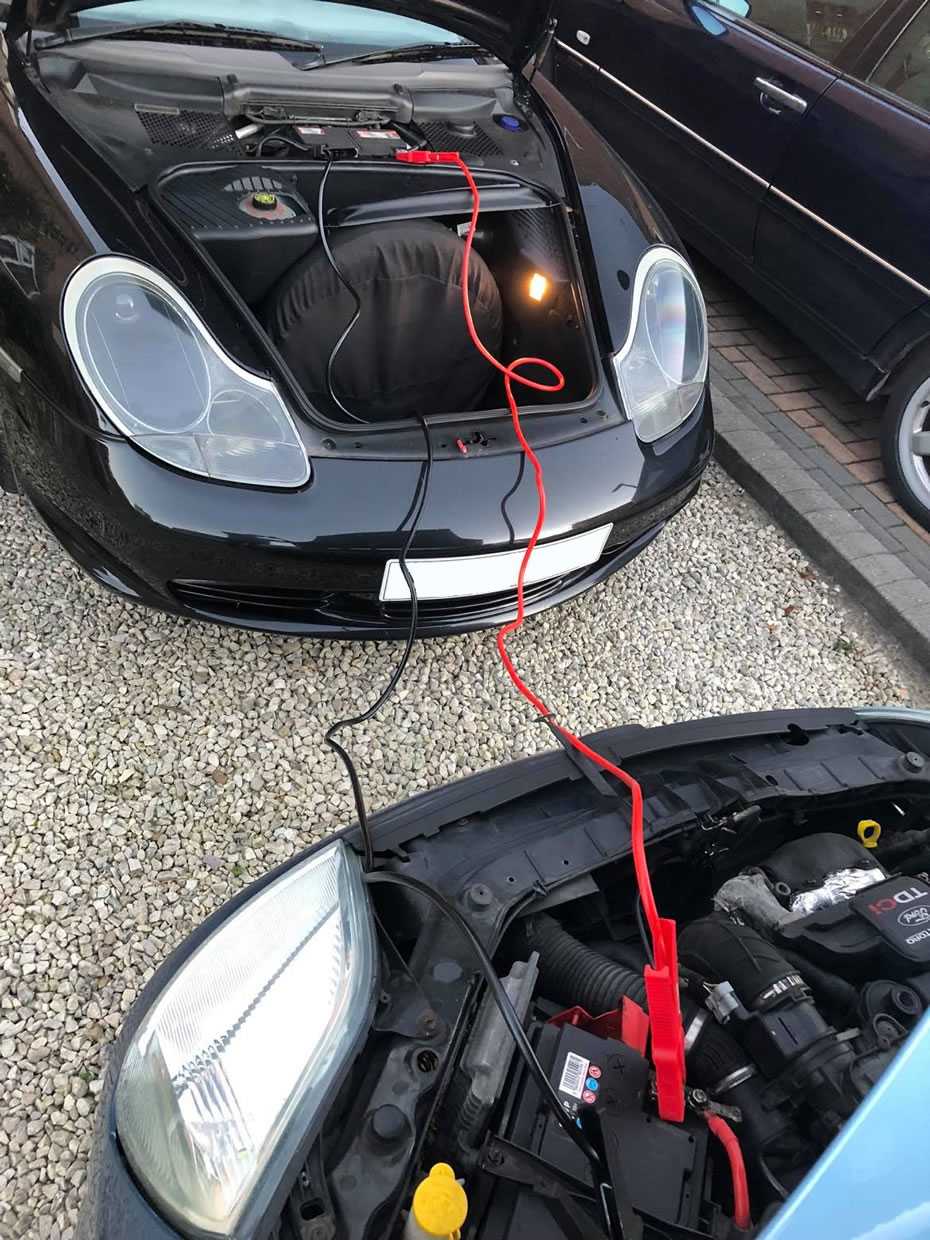 Tips Whilst Jump Starting With Leads

Once you have jump started a car once, you will be able to do it with ease next time. If you find yourself regularly jump starting your car (for yourself and others), we would strongly recommend investing into some heavy duty jump leads. Not only will they last longer but they will also perform better too, which can be required when jump starting large capacity engines. Although more expensive, they are certainly worth the extra investment.

Another tip to keep in mind is when it comes to starting the car with a dead battery. If there doesn’t seem to be anything happening, double check the connections of the leads on each of the terminals.

Jump Starting Without Another Car

Thanks to modern technology, you don’t always need another car to jump start a car but you can now use a portable car jump starter instead. Although these have been around for many years, the latest use lithium-ion batteries and are much smaller, which has the knock-on effect of making them easier to use.

In terms of how to jump start a car without another car, follow the below steps using a jump starter pack:

It’s very much the same process as you would do to jump start a car with leads. The only difference is that you don’t need another car to connect the leads to because you can simply use the jump starter pack.

However, if you have an electrical drain, it’s worthwhile trying to find the cause because frequent jump starting of your car isn’t good for the car’s electricals and it’s also time consuming when you simply just want to go somewhere in the car. The battery may also be on its way out, which means you may need to purchase a new battery for your car.