Catalytic converter theft is a growing problem in the UK due to the fact that they contain valuable metals and can be removed in less than a minute. Within this article, we discuss everything you need to know regarding the theft and what you can do to prevent it. 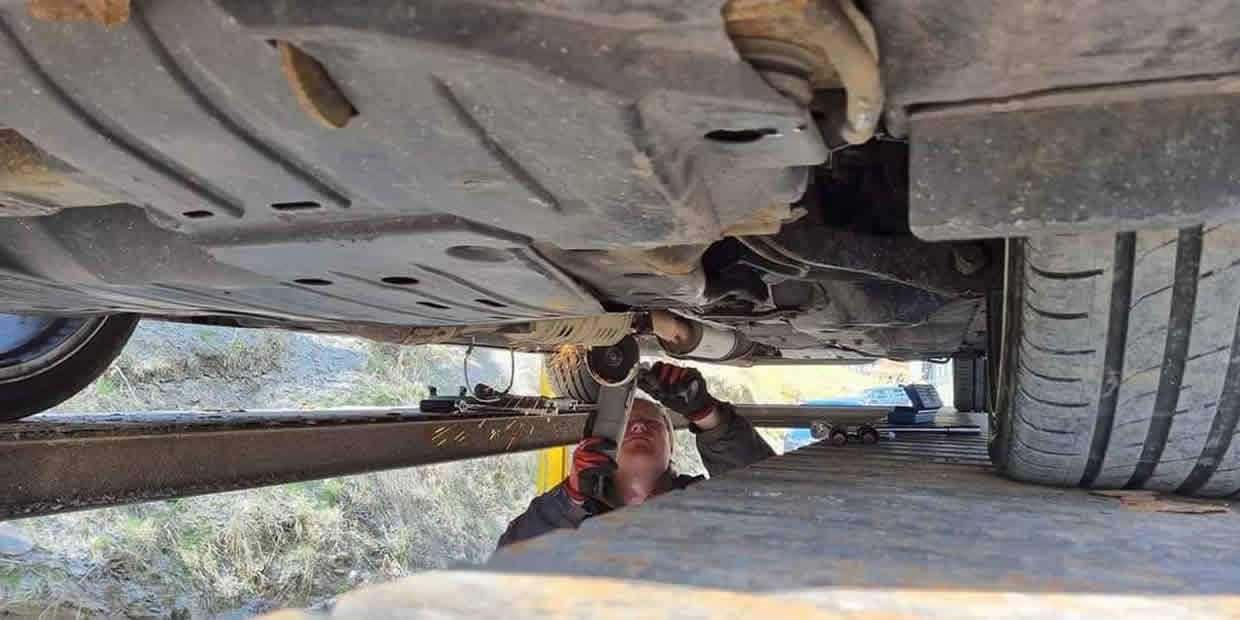 Catalytic converters are an essential component of any petrol or diesel car made after 1992 and they are designed to reduce the emissions that come from the exhaust. This is made possible by using a chamber (called a catalyst) to change the harmful compounds produced by the engine into safe gases which can then be output from the exhaust.

In order to make the conversion happen within the chamber, the catalytic converter contains precious metals such as platinum, palladium and rhodium and this is what makes them very valuable at a scrap yard. Therefore, due to a catalytic converter’s scrap value, they are very susceptible to theft, which is becoming very common all over the UK.

Why Are Catalytic Converters Stolen?

Compared to a few years ago when criminals mostly stole car radios or alloy wheels, catalytic converters are now the main target. This is due to how valuable they are as scrap and the fact that they can be stolen in less than a minute.

All that’s required for a criminal to successfully steal a catalytic converter is a trolley jack and an angle grinder. When equipped with these two tools, they can then approach your car, lift it up in the air and grind the catalytic converters away from the exhaust. It’s really that easy (quite worryingly) and there are hundreds of videos online that shows the process in action across the UK. Unfortunately, due to how quick it is to steal, many people don’t realise what’s actually going on.

How Much Is A Catalytic Converter Worth?

In order to find out how much your specific catalytic converter is worth, you’ll need to provide a recycling company with a serial number. As shown in the photo, this particular serial number was the “KT” number but this does vary between car manufacturers. Alternatively, if you are not sure, most companies will allow you to send them a photo directly. If you agree on a price, you’ll need to show your ID and proof of address when you arrive to sell it and you can only be paid by a cheque or bank transfer. This is a legal requirement under the Scrap Metal Dealers Act of 2013 in order to prevent dishonest transactions. 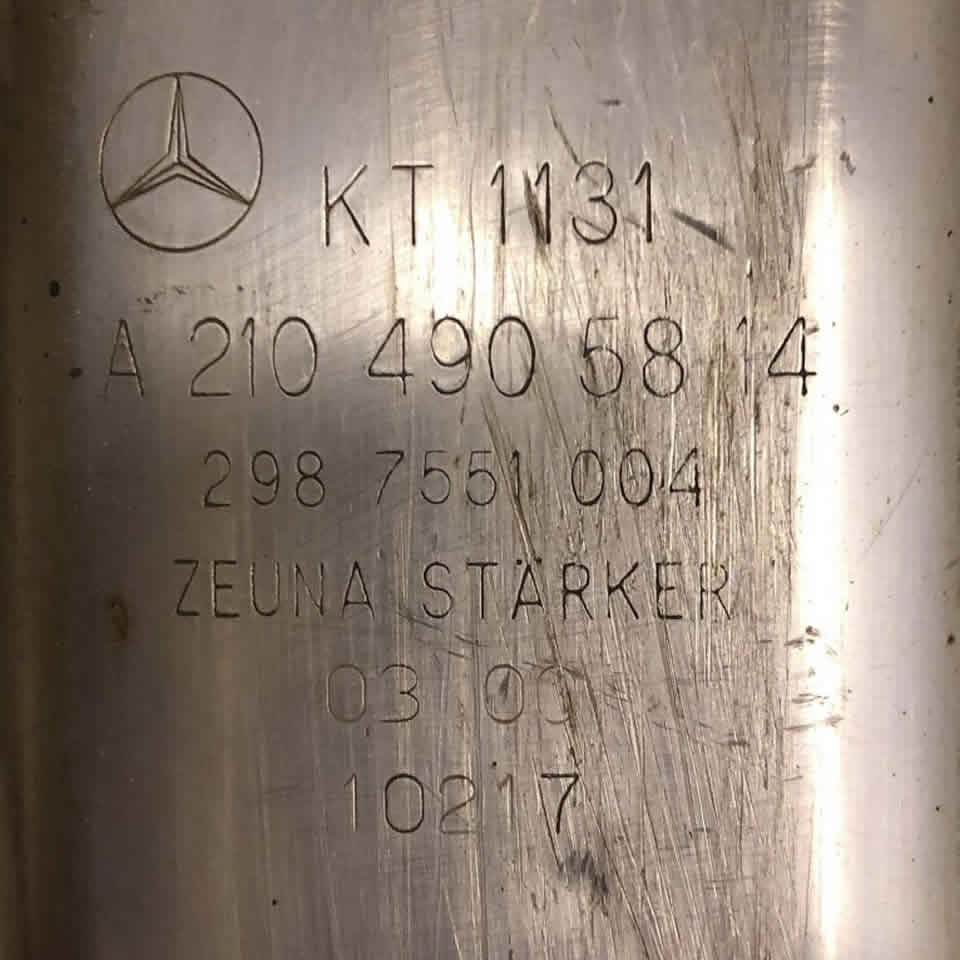 What Cars Are Targeted For Catalytic Converter Theft?

The value of catalytic converters varies from car to car and those with the most valuable are at more risk of being targeted for catalytic converter theft. The value all comes down to the precious metals inside and certain cars are known for having a higher concentration of platinum, palladium and rhodium.

As a general rule, cars that are more emissions-friendly (such as a hybrid) feature more valuable catalytic converters because they are less likely to corrode. This is because they run on both electric and an internal combustion engine, which means the metals inside aren’t being used whilst the engine is running on its electric motor.

Older cars are also at high risk because earlier catalytic converters were filled with far more precious metals. This is because at the time, the metals were cheaper for the manufacturer and engines weren’t as efficient as they are now.

In the UK, the below car models are currently the most targeted for catalytic converter theft:

Can You Drive Without One?

If you’ve been unfortunate enough to be targeted by catalytic converter theft, you may be wondering if you can drive without one. The answer to this is yes but it won’t be pleasurable or legal in the UK because the exhaust will be very loud and your car will produce emissions above the permitted standards. Therefore, although your car will run and drive, it’s advised that you get a second hand or brand new catalytic converter installed as soon as possible.

Does My Car Have A Catalytic Converter?

Catalytic converters became a legal requirement in 1992 because new cars at the time needed to meet the European emissions standards. 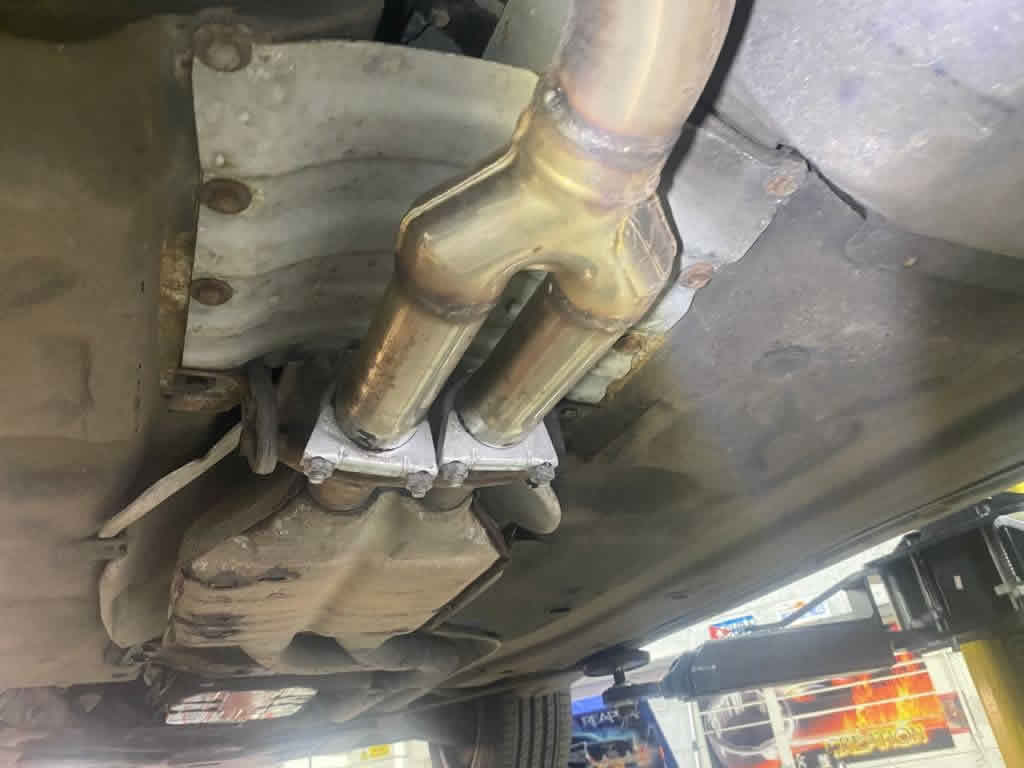 How To Prevent Catalytic Converter Theft

1. Park In A Secure Location

The most effective method of preventing catalytic converter theft is to park in a secure location. It sounds obvious but most criminals are looking for an easy target and if your car is parked in a well lit area with plenty of CCTV and foot traffic, it’ll make your car less of a target. Although they can steal a catalytic converter in as little as a minute, they’ll need to make a lot of noise in the process and grinding metal is certainly a noise you’ll notice.

2. Make It Difficult To Get Under The Car

As well as parking in a secure location, the way you park is also a great prevention tactic. For example, if you are able to park near a kerb, wall or fence, it’ll make the job of placing a trolley jack under your car far more difficult. Parking your car with the bonnet facing a wall is also recommended because most catalytic converters are located at the front of the car.

3. Install A Shield Or Clamp

A relatively new method of preventing catalytic converter theft is with the use of a shield or clamp. The most popular type of shield is one known as a “Catloc” but there are many cheaper alternatives available online.

The shield works by simply protecting the accessible areas of the catalytic converter from being tampered with. A clamp is a similar device but it attaches to the exhaust pipes and chassis, which makes cutting through it very difficult to do.

If you have either a shield or clamp installed, you can go a step further and put a sticker on your car to show that it has been locked. This’ll certainly act as a great deterrent even if you haven’t got it secured.

Another method of making the catalytic converter difficult to remove is by welding the bolts shuts that hold it on. This can be easily achieved using a MIG welder or a local garage will be able to do it in less than a hour.

Marking your catalytic converter with an invisible marking that makes it traceable not only helps the police with their attempts to fight crime but it also makes it less desirable to steal. Toyota have been leading the way with this type of deterrent and they offer the marking service for free. However, to make sure the criminals can see that it has been marked, you’ll want to make sure you have a sticker on your car because this will act as a huge deterrent.

If your car doesn’t already have an alarm installed from the factory, installing one is highly recommended. This is because as soon as the car is lifted in the air, the alarm will be triggered and it’ll certainly scare off any criminals.

For those that want to protect their car that’s parked on the drive, you could go a step further and install a driveway alarm. This type of alarm will notify you if someone enters your property via the driveway.

Is Theft Covered By Insurance?

Due to the fact that purchasing a new catalytic converter can be very expensive, you’ll want to ensure that its covered by your insurance. As long as your policy covers theft, you should be covered if your catalytic converter gets stolen. However, we recommend that you read through the small print of your policy to double check because some insurers may only cover certain aspects of theft.

Whenever there is a surge in the scrap value of precious metals, the theft of catalytic converters also surges and it’s a really big problem in the UK. However, hopefully our above tips have given you some options to consider if you are looking to further protect your car. If you require further information regarding catalytic converter theft, feel free to get in touch and we will try to provide our assistance where possible.